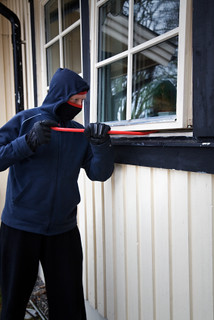 A report from Iowa State University’s Journal of Forensic Science revealed some surprising patterns used by burglars. The collection of data was designed to help security system companies better understand the professional and unprofessional burglar. The study aimed to help possible victims understand that burglars are not who or what they average civilian thinks they are.

Burglars come in all sizes, shapes, nationalities and both genders. It is a bad idea to have preconceive what a burglar looks like. You might be surprised.

Iowa State Study
The Iowa State study infers that the majority of burglaries involve at least one or more persons who live within two miles of the targeted residence or office building. Infographic designer, Justin Marini, said, “In this infographic, we learn that most burglars live within two miles of the homes they target and most also have prior criminal offenses which include drug sales, robbery and assault.” What this means is that if your house is robbed, there is a good chance you will know one or more of the perpetrators.

This makes it especially important that your home security information stays confidential. It is a good idea to change your passwords or codes every few months. There is also a new mobile app that enables the owner to receive an alarm and images if the home security system is triggered.

Secure the Property at Night
Another revelation for the Iowa State study is the fact that, most burglaries are committed during daylight hours. Surprisingly, July and August are the months in which the highest volume of residential burglaries is committed. These are also the most popular vacation months.

The average burglary takes place in 12 minutes. That includes entry, grabbing the loot and exiting. Neighborhood watch groups should question unmarked vans or trucks, but many burglars escape on foot to a vehicle parked in another area.

Most break-ins do not involve violence or the use of a weapon. A surprising number of home robberies happen at night, when the homeowners are asleep. In the event you feel your home has an intruder, the first thing to do is call the police. The second act should be to gather the family and get to a safe place. Once there, wait for the police.

In the real world, heroes get hurt. While burglars do not want to use force, when they are cornered, they will. Chances are good that by the time you could must an offense, the burglar will be gone. Hopefully, your security cameras will have captured images to help the police track down the burglar. In any case, play it safe.

The Future Of Online Education via Broadband