Today’s college kids have changed with the times, just like every age group. College students still party, drink too much, and basically act in ways they shouldn’t, but now they are incorporating Facebook and online social networking into their lives more and more. Social networking lets these young adults plan events and parties much more easily than in the past. Facebook can bind together an enormous campus; one such example is the University of Central Florida, which has 60,000 students who all connect online through Facebook.

As everybody knows, Facebook has quickly expanded from a college only fad to a social network that encompasses nearly the entire earth. Over 800 million people actively use Facebook, which helps normal civilians connect in ways we’ve never seen before. Sharing pictures, knowing what others are doing, and following your favorite celebrities has never been easier.

Facebook also now features ads for a small fortune, and it generates billions each month. These ads create huge profit turns for the companies simply because of the vast number of people that see these sales pitches on Facebook.

Facebook has grown so much that other sites know they need to have a connection to the social network giant. That’s why nearly 40% of all websites have a Facebook “like” button. This lets their fan base grow on Facebook as they acquire more and more traffic. 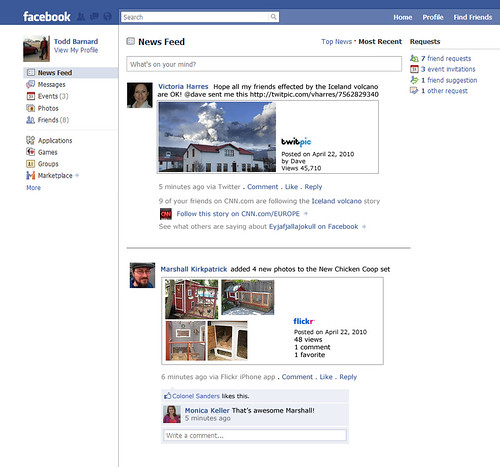 Facebook Feeds are dominated by brands looking to monetize their company.

Mark Zuckerberg’s business has changed the way we speak also. People don’t say they’re a “fan” or anything anymore. Now we “follow” people on Facebook, and we “like” their pages to get updates and pictures about them.

Facebook became even more fan-friendly with their IPO stock offering. Their shares we $38 a piece, which valued the company at $104 billion. That made Facebook the largest IPO for any U.S. tech company, ever.

FarmVille started Zynga’s popularity in 2009. It seemed as if people couldn’t walk arond their college campus without striking up a FarmVille conversation with either a close friend or even a complete stranger. Literally everybody was on FarmVille to some degree.

RageHats, an online company that sells hats, sunglasses, and other party supplies has embraced the Facebook craze: they created a Facebook page for their followers and have a “like” button for their fans. Their not only increased their ranking in the Google search tools, but it also raised their following because everybody, including their target audience, actively uses Facebook.

Numerous other companies, especially niche companies, have followed in the footsteps of Rage Hats, building a viral brand and produt online.

By Jorge Svenson, a Facebook enthusiast and SEO expert who researches SEO regularly to develop new methods of ranking.

Five Ways To Monetize Your Blog