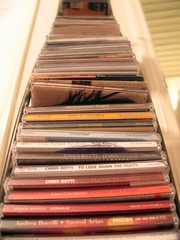 The purchasing of physical CD’s has died out in recent years, in part due to iTunes and music streaming from your computer. But just when you thought you were benefiting the environment by streaming music and using YouTube to watch videos instead of paying for the production and shipping of CD’s, it turns out that you thought wrong.

According to recent studies by Bach Technology, digital music streams can actually harm the environment rather than help it. This is due to several factors, including heat generated by datacentres sucking up a majority of the energy cost for streaming. In order to cool these datacentres, inefficient air conditioning units have to be implemented and take up close to three or four percent of the world’s electricity energy.

There’s always been that one song every once in a while that gets released and you fall in love with. If you bought the CD you would even put the track on repeat and listen until you memorized all of the words and could sing along. Now if you hear a song that you just can’t live without, you can listen to it on YouTube as many times as you’d like to or replay it over and over again from a streaming music site.

While this might be ideal for those unwilling to go out and buy the entire CD, unfortunately this method causes yet another big issue with the environment. Popular music streaming programs that repeatedly stream individual tracks is absolutely not desirable for long term media solutions. When condensed and reviewed, streaming or downloading a total of 12 tracks with compression just 27 times by a single user equates to the production and shipping of one physical 12-track CD album, in energy terms.

There’s also the issue with YouTube being used as a main music and video source by today’s youth. Rather than downloading a song or buying a CD, many teenagers will just log on to YouTube to watch a music video or check out the latest movie trailer. The success of YouTube in turn is creating a rise in the use of electricity. Since YouTube’s energy consumption is expected to continually rise over time, this creates a huge problem for our environment and energy conservation.

While there haven’t been any tried and true solutions to this growing issue just yet, we look to the music industry to be the thought leaders in an effort to change this. There’s one thing that’s for certain; if we keep traveling in the direction we are currently, there could be some serious repercussions down the road in regards to our environment and the overuse of energy.

Sandra Daiken is a freelance writer focusing on finding the best internet browser and following the latest trends in technology.

The Advantages Of Mobile Marketing