Install a television or FM antenna to improve reception. A quality antenna provides the receiver with stronger signals and less noise. If you live in a fringe area, a good antenna location coupled with a high-gain antenna can have dramatic results.

Never install an antenna where it may contact high-voltage wires! Contact with a high-voltage line can cause serious injury or death. Some municipalities prohibit or restrict outside antennas, so check local laws.

The type of antenna you choose depends on the distance to the transmitting station. High gain antennas are needed in fringe areas, but a lower gain unit will work when stations are close. The big difference between them is physical size and the space needed for mounting.

Omnidirectional antennas are compact, but they generally do not provide any gain unless they’re equipped with an amplifier. These disk shaped antennas are often seen on recreational vehicles. 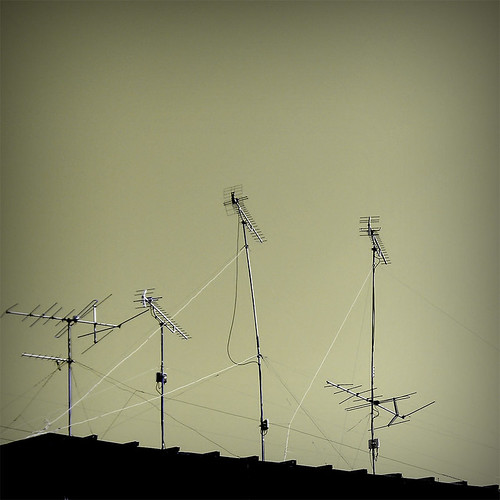 Mount your antenna on a mast as high as possible. There are various types of mounts that attach to the roof, a chimney, or the side of a building. Remember that the mount will see stresses from wind, rain, snow and ice, so be certain it will hold up under those conditions.

Antennas can be mounted in an attic when suspended from the rafters. Small omnidirectional units can be installed in a closet.

Directional antennas should be aimed at the transmitting station for best results. A rotator on the mast can move the antenna through 360 degrees. Rotators are controlled from inside the house through a wire cable.

Feed line connects the antenna and receiver. It may be coaxial cable or flat twin lead, depending on the input impedance. Coaxial cable used for television is a 75 ohm feed line while flat twin lead is 300 ohms. This is important because it assists with power transfer. An impedance mismatch will cause signal loss.

A 300 ohm twin lead can be connected to a 75 ohm receiver input through an impedance coupler, essentially a transformer that matches the line to the input.

When running a feed line through a wall, be sure to add a small loop below the hole so that water can drip off without reaching the wall.

Weak signals can be improved with a small amplifier installed at the antenna. These amplifiers are often used with an omnidirectional antenna. Yagis have more gain and generally do not need amplification. Power to the amplifier is supplied through the feed line so there are no additional wires.

A lightning arrestor is a practical safeguard against potential strikes. It’s installed in the feed line outside the house where it’s connected to a substantial ground rod. In a lightning strike, the arrestor diverts the energy into the ground. The arrestor and feed line will probably be destroyed, but they’re cheap insurance against lightning.