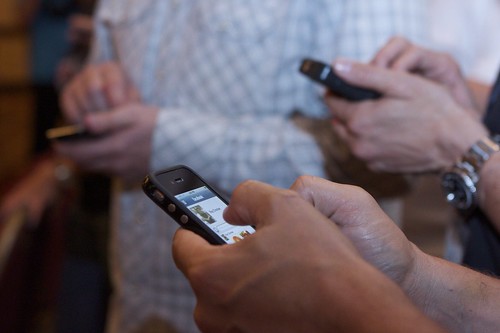 We’ve had smartphones kicking around for a little while now, and we’re starting to get accustomed to the technology. More to the point, we’re starting to get the hang of what it’s really capable of doing. Freed from the concerns about things like making simple calls and sending basic text messages, we’re seeing the potential in what the devices are good for. The next generation of smartphones is where we’re going to start seeing some real innovation in the field. So read on and we’ll take a look at the big names on the horizon.

Blackberry haven’t been have a great time of it these past few years, having lost out heavily in the U.S and UK markets with the increasing popularity of iOS and Android devices. Over the last few months there has been a lot of talk about the new OS10, something that is meant to be Blackberry’s last great hope for salvation.

The phone will outperform all previous Blackberries by miles, offering users a 1.5 Dual Core TI OMAP 5 processor. Even though these are just rumours, the real phone will be displayed for the first time in September 2012. This might be one last hurrah for Blackberry.

The iPhone 5 is probably one of the most hyped phones in history. Apple still manages to charge huge prices for their most prized asset, the iPhone, and the 5th edition will be no different. One of the most exciting things rumoured for the iPhone 5 is the processor, reportedly a quad-core by the name of Apple A6. This would be the first time such a powerful processor would be put into any phone.

The screen is also said to be improved, turning into a 4-inch screen that will be of the same high resolution as the iPhone 4. This will make the phone more suitable for the tablet market, offering an alternative to the chunkier iPad with its 9.7 inch screen. The last big talking point about the upcoming phone is the design. It is said to revolutionise the way people view the iPhone. Of course we’ll just have to wait and see.

Even though the Samsung Galaxy S3 has stolen the show this year, we’re still very excited about the latest HTC effort in the pipeline. The phone will feature the new LTE data transfer technology, allowing users to download at the sort of speeds they are usually accustomed to in their homes.

The phone was rumoured to beat the iPhone 5 as being the first phone with a quad-core processor, but unfortunately users will have to settle for a dual-core processor until newer additions to the HTC line-up appear. The screen is one of the main talking points as it will be a whopping 4.7 inches. It will also offer a full HD resolution of 1280×720.

The name might not suggest a phone giant, but this phone is actually right at the forefront of the latest generation of smartphones. Not only is the phone quite cheap for what you get, they have managed to create the world’s thinnest smartphone at just 6.68mm thickness. The screen is a huge 4.3 Super AMOLED screen, offering a great resolution. The Dual-Core processor will complete almost any task you ask it to perform and the phone’s memory is right up there with the best. When it comes to the best cheap smartphone out there it is hard to beat the Huawei. Just make sure you look past the name and focus on the specs and that way you will be one of the coolest kids on the block!

“Next-Gen Smartphone Previews” is a post from the tech bloggers over at 34sp.com, for all your UK business hosting needs.