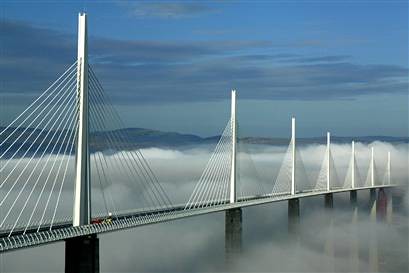 In the advanced world we live in, it’s all to easy to overlook the incredible feats of engineering that have shaped our world. In modern times, everything from buildings to space stations have been pushed to new limits by human technological prowess. Compiled here is a list of the four most incredible feats of modern engineering.

The International Space Station
The International Space Station stands today at the forefront of human engineering capability and progress. A masterpiece of cooperation and engineering, the station is the result of collaboration between the space agencies of the United States, Japan, Russia, Europe, and Canada. Construction began in 1998 and has continued into 2012, with over 125 launches supporting the station and its construction.

Part of what makes the ISS such an incredible feat of engineering is the sheer effort required to construct a habitable station 320 miles above the surface of the earth. Every component of the modular station had to be designed and manufactured in such a way that it could be hauled to orbit by the space shuttle. Aboard the ISS, a massive station-wide life support system sustains up to six astronauts.

The Millau Viaduct
Next up is the Millau Viaduct, an enormous roadway that is as much a feat of aesthetics as it is engineering. Located in the Aveyron départment of France, the bridge stands as the tallest structure in the country and second tallest bridge in the world. Featuring over 2,600 yards of structural steel roadway and 70,000 cubic yards of concrete, the project cost an estimated $400,000,000 and took four years to complete.

Another incredible aspect to the Millau Viaduct is the unique way in which it was built. Using a method called longitudinal launching, the prefabricated roadway segments were slid horizontally over temporary structures using hydraulics. Once the segments were safely in place, they were secured. The resulting bridge has received awards for both its architectural design as well as its structure.

The Large Hadron Collider
Capable of accelerating and colliding bits of matter at near the speed of light, the Large Hadron Collider is an amazing feat of computer and physics engineering. Stretching a circular 17 miles and buried 190 yards underneath the French/Swiss border, the LHC is the largest and most powerful particle accelerator ever built. Massive magnets harness energy levels approaching 3.5 TeV to slam protons and other fundamental elements into one another.

At a price of over $10 billion, the project certainly isn’t cheap. It is, however, very important to the worldwide scientific community. Scientists anticipate using the LHC to unlock information about the formation of the universe and answer fundamental questions about the very nature of physics.

The Burj Khalifa
Towering above metropolitan Dubai, the Burj Khalifa Tower stands at a record-breaking 2,717 feet. The height, however, is not the only aspect of the building that is record breaking. The tower also sets world records for highest occupied floor, highest pumped concrete, and highest restaurant. The construction of the Burj Khalifa was a nine year ordeal that at its peak saw as many as 175 exterior panels being added per day. The amount of rebar utilized over the course of construction topped 31,000 metric tons, enough to wrap a quarter of the way around the earth if laid end to end.

Construction of such a massive structure in a timely manner was made possible by a new technology called jump forming. With this process, workers fabricate steel cages that are hoisted into place, filled with concrete, and left to set. The hydraulically powered shell for the concrete then rises up to allow the process to repeat. With this method, the concrete panels can be quickly formed and stacked upon one another.

Author and engineer, Robert Wallace also contributed to the creation of Best Online Engineering Degree as a resource for people interested in a career in engineering to take advantage of the best online programs available.