With the release of the iPad, Apple turned the world of computing upside down. The iPad offered an alternative way to browse the web, read books and watch videos that bettered the laptop and the desktop. Tablet users soon fell in love with the ability to use their devices while relaxing on the sofa or lying in bed. Magazines and newspapers were also discarded, as users took to consuming content on their tablets. 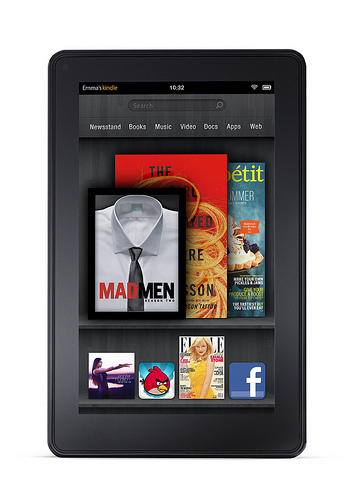 The Kindle Fire differs from the iPad in that it features a 7” screen compared to the 9.7” screen of the iPad. This modification in screen size means that the Kindle Fire is smaller, lighter and more portable than the iPad.

The Samsung Galaxy Tab 10.1 was Samsung’s second attempt to launch a rival to the iPad. Released in June 2011, the Galaxy Tab 10.1 comes pre-installed with Google’s Android operating system.

The Galaxy Tab 10.1 is Samsung’s flagship tablet. It features a high-resolution 10” screen and Nvidia’s Tegra 2 – a graphics chipset capable of producing beautiful games and unbeatable performance.

The Galaxy Tab 10.1 also comes with an 8MP camera and super quick HSPA+ connection for accessing data on the move.

The Galaxy Tab 10.1 is currently the thinnest and lightest 10” tablet available.

The Asus Eee Pad Transformer Prime is the latest and most advanced tablet available today. Featuring a quad core Nvidia Tegra 3, it provides unbeatable performance with a high-resolution 10.1” screen, an 8MP camera and the latest Android operating system.

The dock also features expansion slots such as an SD card slot and an extra battery that doubles the battery life of the Transformer Prime.

The Lenovo Thinkpad Tablet is an Android based tablet with a 10” screen. Featuring a Nvidia Tegra 2 and a 5MP camera, the Thinkpad Tablet differs from other Android tablets on the marketplace in that it is aimed at the business market.

The Thinkpad Tablet also supports a stylus pen that allows for pen input.

The Iconia Tab A100 is a 7” tablet produced by Acer. It runs the Android operating system and features the powerful Nvidia Tegra 2 chipset at its core. It also has a 5MP camera for taking pictures.

Like the Kindle Fire, it is a small, portable and powerful tablet capable of playing games, browsing the web and run apps from the Android App Store.

So, as this guide shows, the iPad is no longer the only tablet in town and there are certainly some credible pretenders to its crown. They all provide great performance, long battery life and functionality that rivals Apple’s offering. Whichever you choose to invest in, you won’t be disappointed.

The author regularly blogs from the comfort of his sofa, about tech, gadgets and industry news

UK Looking to Snoop On Citizens