Measurement has never been so fine as to measure the Higgs Boson particle. It has taken 20 years to build, over 10,000 enthusiastic physicians from 85 countries and a budget no contributing government would enjoy thinking about. But what has resulted is a monumental man made structure that measures 27 kilometers in circumference and weighs 7000 tonnes.

There are six measurement facilities around the circumference, we will mostly be familiar with the ATLAS measurement experiment as the large image below will be familiar with most people. The ATLAS is one of the two general purpose particle detectors, it fires electrons around the LHC at 99.99999% the speed of light with the objective of gaining insight on what happened in the first billionth of a second after the big bang. 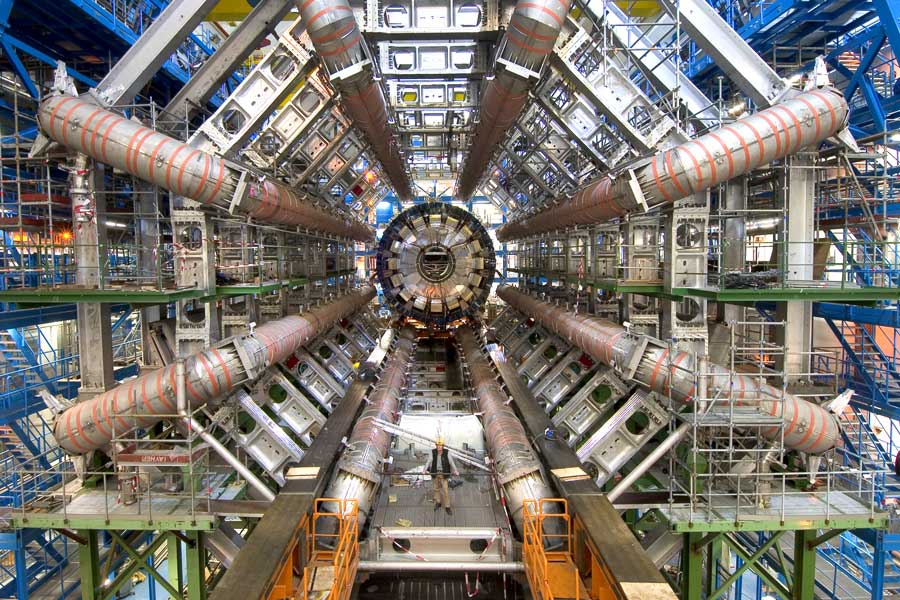 Measurement at this grand but at the same time minute scale is one of the world’s most finest achievements in the advancements of our overall knowledge. On Independence Day 2012 CERN made the announcement that they observed a new boson consistent with the theorised Higgs boson, the missing piece to a much larger puzzle.

Why create the LHC?

The Higgs Boson particle existence means it should be available for research from around the universe, right? Well this isn’t the case, the Higgs Boson particle is one very highly charged and large particle, the thing with large particles is that they are unstable, and decay quickly into some combination of electrons and hadrons. This means the Higgs had to be recreated and measured in a highly controlled environment, and the LHC has replicated this and pulled information consistent with the Higgs Boson.

Why is the Higgs so important?

It might get called into question as to what could possibly be worth all this investment for so many people and from so many countries? The Higgs particle will then provide some layer of proof of the prophesised Higgs field, the Higgs field permeated through the whole universe and through a particles interaction with the Higgs field, mass is defined.

There is not much in terms of actual day to day usefulness of the Higgs particle, but it has been stated that this discovery is a “Five Sigma” finding, one of such high importance it could change the face of future discoveries. For those fanciful types, there are some potential discoveries to come from Higgs field such as manipulation of mass, transportation and potentially if we can realise the interaction between matter and the Higgs field, it could pave way for warp speed travel.

The Higgs boson is a particle that carries force, and makes the Higgs field even closer to being proven, if we could prove the existence of the Higgs field then the current understanding of the standard model of physics will almost be completed.

Andy works on behalf of Vega Controls, precise measurement is a necessity, but not necessarily at the level of the ATLAS.

Openstack, The Open Compute Project And The Brave New World Of Open Servers

Two Perspectives On Outsourcing SEO In 2012